Year Six set off for our first trip in a long while to the famous Westminster Abbey in London. We arrived at Purley Station to start our journey to London Victoria. As soon as we had arrived, the children set off for the Abbey. What a wonderful sight! Most of the class had never seen the ancient church before.

Our visit started in the Education Department of the Abbey. There we were introduced to our guides for the day. To begin with, we all looked at photographs of the Abbey and discussed its importance within English history. The pupils were extremely good at answering questions and were commended for it.

The discussion moved on to the stained glass windows in the Abbey. As part of our workshop, the pupils designed their own stained glass window and after being put in a heater, the window was reduced so that it could be used as a small key ring to take home.

Below are some photos of the process. 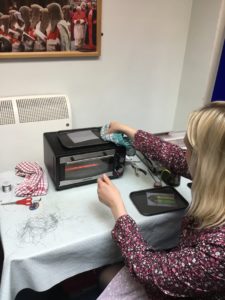 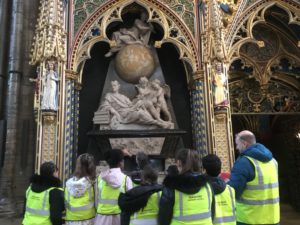 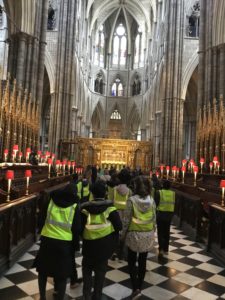 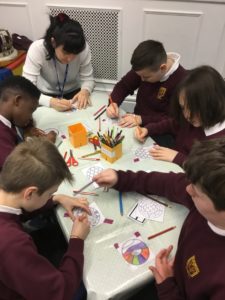 Afterwards, we were taken on a tour of the Abbey. It was amazing to see the pupils’ faces when looking all around the church. To name but a few highlights: the Coronation Chair, Rose Window, David Hockney Window, tombs of past monarchs, the High Altar and the beautiful ornate, high ceilings. The guides asked the groups what they already knew about the monarch and the role of the monarch. We made links to previous history units of work about WW2 when we stood next to the tomb of the Unknown Warrior. 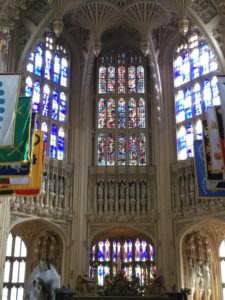 We strolled around Parliament Square taking in all the sights. It was incredible to see some of London’s most notable landmarks: Houses of Parliament, Big Ben, Westminster Abbey, London Eye and the Shard was incredible – what a skyline! We then finished our trip by walking through St James’s Park and stopped to look at all of the different varieties of birds that reside in the park.

Our trip this year was linked to our learning on British Values and the role of the current monarch. We saw the Abbey where Queen Elizabeth II was coronated on 2nd June 1953. This year marks HM 65 years as our esteemed monarch. It was then appropriate that we should visit Buckingham Palace. What a sight to behold!

The children are now fully prepared with ‘sticky’ knowledge all about British Values and the role of the current monarchy. I want to thank the class for their wonderful behaviour on our trip. Our first outing since Covid. Thank you so much for our helpers: Mrs Wright, Mrs Malik, Mrs Carmody and Mrs Escott for making the trip run so smoothly.